One of the hardest parts of being FPL and attending a conference is getting a trip report done while you try to catch up to everything you missed while you were gone! But better late than never, here’s my report from this past weekend’s Southeast LinuxFest (SELF).

Thursday I packed up and headed to SELF v2.0. A short flight from Reagan National landed me in Greenville, which incidentally has one of the most pleasant access roads I’ve seen. The organizers had arranged the conference at the Marriott in Spartanburg which was relatively new and very nice accommodations. Of course most of the staff was busy rushing around making sure everything was ready for the conference on Thursday, but I ran into David Nalley, Dave Yates, Amber Graner, and others who were responsible for making SELF happen. That evening not all the Fedora folks had arrived, but I did get to have dinner with Robyn Bergeron of Fedora Marketing {fame,infamy} and Steven Dake, who works on corosync and high-availability stuff for Red Hat. Turns out Steve is a cigar guy and was kind enough to offer me one, which I gladly accepted. It was a relaxing, cool evening, and the SELF organizers came out and joined us eventually as conversation went into the wee hours. 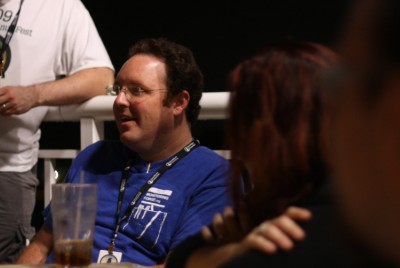 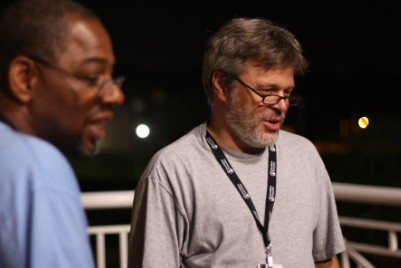 The next day most of the Fedora folks gathered in a conference room to plan and then work on cleaning up various areas on the wiki, particularly the Docs Project contributor and process pages. They’ve gone wild and unweeded for a while and this was a good chance for us to make a fresh start. Ohio LinuxFest core team member Beth Lynn Eicher was on hand as well, and her fresh eyes really helped us find places where we needed to do some serious revamping. Ian Weller and Eric Christensen drove us to write several texts, and we even came up with an idea for a team contact template that will be available soon. We’ll be swapping in the new content and sweeping out the old shortly as well. It was nice to be able to have this “bonus meeting” in addition to the planned activities for Saturday and Sunday. Friday evening there was a nice speakers’ dinner planned by the SELF staff, after which I skipped the party so I could have a nice long jaw with Max Spevack, and so I could be sure to rise early.

On Saturday I spent the morning getting ready for my talk at 10:00 on the Fedora Project and what our four foundations mean in theory and practice. My talk’s available for download under a CC BY-SA 3.0 license, and when the video is available from SELF I’ll post a notice here. My room was pretty full, so I was pleased, especially since it didn’t seem that most people had made it out of bed for an 8:00 start time. I think I gave a solid talk, although I think it wasn’t as humorous as some of the talks I saw or heard about during the day. Reminder to myself: it’s OK not to be so serious when presenting! Meanwhile, our erstwhile Fedora Ambassadors held down an awesome booth: 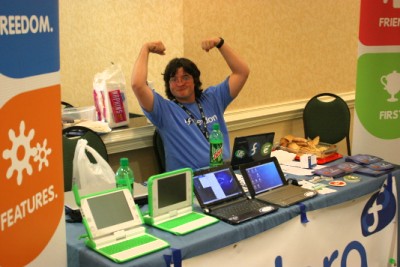 I saw some other interesting talks such as Ian Weller’s presentation on “datanommer,” Doug Vann’s on Drupal, and Daniel Chen’s on how to help unbreak Linux audio (the answer is not turning off PulseAudio, by the way). 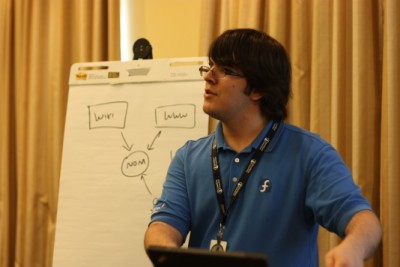 But one of the highlights for me was getting to see a talk by Wietse Venema from IBM’s T.J. Watson Research Center. Dr. Venema is famous in one of my previous fields of endeavor for a seminal textbook, which I brought and had him sign. He was a nice guy, and he even joined us at the lunch table later. 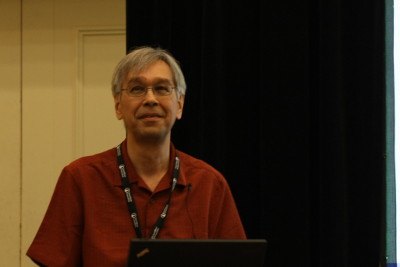 And I was gifted with a remarkably great-smelling bag of chocolate cappuccino from Klaatu of Hacker Public Radio (among other outlets), to which I hope everyone is listening. In the afternoon along with all the other Fedora folks I attended Max’s excellent keynote. I had the privilege of doing the keynote last year and it was nice to see another well-known Fedora personality tapped for this year’s closing remarks. I think Max really took advantage of the keynote to talk about open source issues in general, and how it could be leveraged by people in their business, making the talk about more than simply Fedora. It was incredibly enjoyable and Max spoke passionately, as he always does. 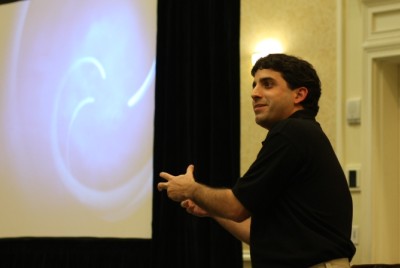 I have a great photo that happened to catch Max at a moment when his face has a look that’s completely out of context to the presentation, which I’m saving for a caption contest later on. A couple amazing things happened after the keynote. First, Ben Williams, one of our Fedora Ambassadors, won not only a brand-new Nexus One phone by random drawing, but also a raffle for a decked-out Pogo Linux workstation, the winning ticket for which he purchased at the last minute after already having bought five others. What a stroke of luck! Just as amusing was this prize, won by Jon “maddog” Hall — good to see he might have the chance to be important in software one day: 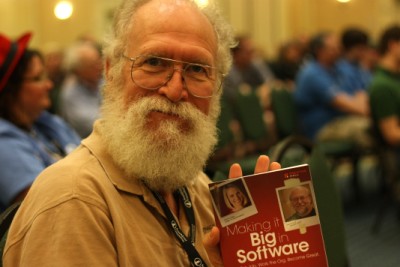 We stayed around to attend maddog’s BoF session on Project Caua. Then while everyone else was prepared to start partying, a few of us including Max and Michael DeHaan slipped off to a marvelous Thai restaurant, where I had a duck panang that was just about perfect and we all had a good time trolling, and being trolled by, our boisterous waiter. We returned to the hall to catch the end of nerdcore rap group Dual Core’s set, and have a brew or two. Once again, it was important not to stay up too late because Sunday was starting at 8:00 again. 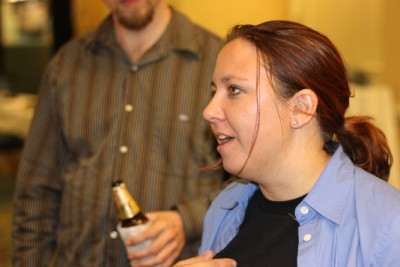 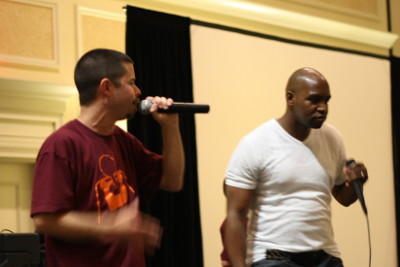 Or maybe that was 9:00? Well, that’s when the first real session of DrupalCamp began anyway. I was only able to attend a couple talks which were very much introductory. Since I’d already read about, installed and played around with Drupal they weren’t too helpful for me personally, and the advanced talks were beyond my experience. But I got to meet a few people who were doing Drupal and make some contacts that might come in handy in the future for Fedora teamwork.

The Fedora crew gathered (at the Krispy Kreme where yr. humble narrator stoically refused all manner of tasty fat pills) to sketch out the battle plan for the Fedora Activity Day coming up that afternoon. This FAD, because it was attended by people with a wide variety of skill levels, started with an incredibly fun session where we debunked Fedora myths and exposed Fedora truths (think “dependency hell/yum is slow” or “just disable SELinux”). One of my favorite parts of that hour was when Dan Walsh piped up to say that, from his developer POV, anyone filing a bug against his work was making a substantial contribution that he very much appreciated.

I had to slip off after the first hour because I was giving a two-hour PyGTK talk for beginners. Although it was difficult to cater to the expectations of a variety of skill levels in the audience, the talk seemed to go over well. A few of the more advanced folks were likely a bit bored in the beginning of the talk, and a few of the people with no experience were probably lost near the end, but I think most everyone got something useful out of the talk as a number of people told me afterward. It was a lot of fun presenting on something semi-technical and I expect that the eventual video will be more useful, since people can fast forward through the boring parts, or review the easy stuff while trying things on their own systems. One of the parts I most enjoyed about giving the talk was pointing out that FOSS is global, and that even new developers should keep internationalization and localization in mind when programming so they maximize their audience and their impact.

When I returned to the FAD, the numbers had shrunk somewhat as attendees departed the SELF conference via car or plane for home. But there were still about a dozen people around, and we continued to talk about current projects and ways to get involved in them. One young man named Adam seemed particularly interested in our Infrastructure team and Python web programming (which he does for a living) and I encouraged him to come by a meeting on IRC when he gets a chance.

Finally it was time to bid everyone goodbye. Max, Ian, and Eric and his friend Tim had departed already. I had a few conversations with FAD attendees on the way out, including a very constructive one about Fedora’s freedom principles and the way they apply to things like Adobe’s Flash software. I ran into some of the SELF organizers and again thanked them for their superhuman efforts at making the conference a great success. Then I met up with a couple associates attending SELF at the hotel pub and had a nice quiet dinner to unwind, after which we joined Robyn and Steve on the patio for some great conversation about programming, geek history, chess, music, and life in general. It was a superb way to end the weekend and a fabulous conference. 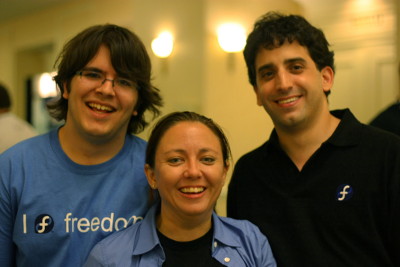 Monday morning I woke up at about five in the morning to catch my flight home, and took the rest of the day as my substitute weekend. This coming weekend I’ll work on getting the rest of my photos uploaded from the conference, or at least those that were worth a hoot. I want to thank all the Fedora friends who helped make SELF such a great conference, including our Ambassadors who manned the booth, those who signed up to help improve free software, people who shared their thoughts about where we’re doing great and where we could do better, and of course the SELF staff for their many tireless efforts. I’m looking forward to SELF 3.0 already!