I finally picked up a piece of equipment I’d wanted for a while — a decent desktop-mounted boom arm to use with a condenser mic for recording podcasts. After a little review reading I settled on the Heil PL-2T and I’m pretty pleased with its looks and performance. Not only is it quiet and very sturdy, but the tension springs are well hidden in the housing, and there are handy removable cable guards so you can keep the mic cable routed in the housing. 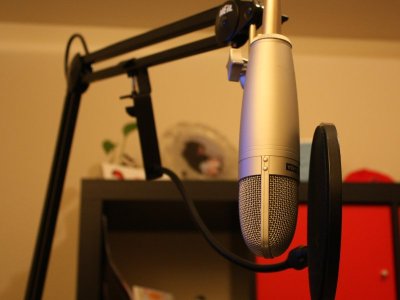 The mic I have mounted is not a super-expensive model. For those readers who are considering podcasting but don’t know where to start when it comes to mics, a versatile choice is a large-diaphragm condenser mic like this Superlux CM-H8A. There’s a wide selection of Chinese-made condensers like this to choose from; some are even marketed nowadays under well known names in recording like M-Audio and Shure. They tend to run in the $80-150 range.

As can be expected, quality varies. If I was looking for matched sets, I’d probably have to do a little testing, and go back and forth with a physical store taking home and returning mics to get close enough for comfort. That’s a consequence of paying $100 for a condenser as opposed to $400+. But since I only needed one solid mic to record voice in a non-professional context, I didn’t want to waste a lot of time dithering and hand-wringing.

You’ll notice I don’t have a shockmount on this mic — that’s something else I kept meaning to pick up and simply forgot when I ordered the boom arm. That will be next.  However, if I’m not banging up against my desk or the boom arm, it’s not a critical worry right now. I’ve had this mic for a while and used it in a variety of contexts, and I can cut out the vast majority of rumble simply by engaging a 75Hz cutoff on my mixer, or using the mic’s internal switch which cuts off around 80 Hz. (For those of you who aren’t audio geeky, that’s a pretty low bass frequency, the kind that would show up from a “thump” that resonated through the mic from something it was attached to either directly or indirectly.)

The pop filter is essentially a gooseneck arm attached to a circular frame that has two layers of nylon inside, a little less than a centimeter apart. That sits between the mic and my mouth to keep plosives (sounds like ‘b’ and ‘p’) from spiking the mic levels and sounding like I’m spitting into the listener’s ear.*

Although I have a large mixer with mic preamps built-in (as most prosumer models do), there are alternatives such as the Alesis USB mini-mixer Clint Savage uses at Fedora events, or a dedicated little mic preamp such as a venerable ART Tube MP. Each method has its advantages and disadvantages depending on your level of comfort with audio processing and twiddling.

In my next post, I’m going to go through one possible process of voice recording, using entirely free software. 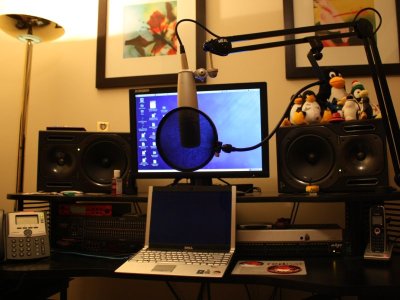 * They’re usually not more than $20, but if you’re on a super-tight budget you can actually build one of these using a wire coat hanger, ladies’ pantyhose, and a wide solid circular object like a used-up roll of masking tape or a rubber gasket to keep the layers of nylon apart, securing it with a strong adhesive like duct tape. (It will look horrible, but it can get the job done.)